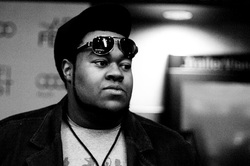 I was born on September 20th, 1986 in Cleveland, Ohio to Ann and Melvin Thornton. I lived in Warrensville Heights, Ohio for much of my younger years with my older sister Bridgette and two older brothers, Duane and Melvin II. My first formative taste of film was the 1993 summer blockbuster Jurassic Park, which my older brother Duane took me to. The movie scared the hell out of me, but I was hooked on filmmaking from that moment forward. I began tinkering with my dad’s VHS and still cameras much to my father’s dismay, of course. Learning how to take apart the VHS cameras and putting them back together gave me a greater understanding of the technical aspects of filmmaking. My father taught me how to shoot with a 35MM Nikon still camera which taught me focus, aperture and lighting techniques.

In August of 2000 my family moved to Valencia, California coinciding with my father’s retirement from the East Ohio Gas Company. I attended William S. Hart High School and graduated in 2004. From there I bounced around a few years trying to figure out what I wanted to do. I was young, and the world was mine to explore. I enjoyed the new freedom, but unfortunately not for long. My father had his first heart attack in 2005. I was the only one home and got my father to the hospital in time. Despite rest and recovery my father would have three more heart attacks until finally succumbing to a combination of a stroke and pneumonia on October 31, 2008. I began to slowly withdrawal from college after my dad's first heart attack, and when he died I completely gave up.

Pulling myself back up, I enrolled at the local community college and took an advanced filmmaking class for fun at the suggestion of my now good friend and mentor Mike Ott. Mike was teaching the class and probably just needed a few more people to sign up in order for the class to run.

The class would be a life-changing and spiritual awakening for me.

I learned to embrace the power and healing in film. I could take frustrations and emotional damage and pour them into filmmaking and hard work. For the first time in my life I felt a purpose in the world and knew exactly what I wanted to do. In a way, filmmaking saved my life. If I had continued down that spiraling road of self-pity and self-destruction I would not be the man I am today. I might not be alive.

In the summer of 2009, Mike asked me to come aboard as producer for the feature length film Littlerock (2010). As with many indie films at that budget level, I wore many hats on set. Not only was I a producer, but I was also the on-location sound mixer, the Assistant Director, payroll administrator, transportation liaison, and on-set security officer. Working sound on this film gave me a deeper understanding of the intricacies in moviemaking. Littlerock went on to open at the San Francisco International Film Festival in April of 2010. It would win the AFI Audience award later than year, the Reykjavik Film Festival Puffin Award, the Independent Film Festival of Boston Grand Prize award and was not only Nominated for a Gotham Award but won Best Film Not Playing in a Theater Near You. In those four years since I wandered out into the deserts of Southern California, with a Sony EX3, a edirol R-44 4 channel mixer and a few friends, I have produced seven feature length films, won a Gotham Award, an AFI Audience award, and have just been honored with a 2014 Spirit Award Nomination. More importantly though, I have made life long friends in my fellow filmmakers Jose Santos, Mike Ott, David Nordstrom, Lee Lynch and Ryan Jameson, but also found a purpose in life.